Geo-observation means observation and mapping of rockmass and ground parameters that are influencing on the behaviour of rock excavations, such as cuttings, tunnels, caverns and shafts.

In fact, geo-observations are often the most important contributor for:

A precondition for good characterizations is that the geological conditions are understood /or documented so the engineering geological observations can be placed or viewed in a broader context. Especially important when the rocks are faulted.  Field characterization of rocks, joint features and jointing features includes:

When the geo-observations are performed in the rock excavation (where the information is used for engineering and design), the results can be used directly in evaluations and rock engineering.

However, when the geo-observations are made on the terrain surface, often far off the underground rock excavation in question.  Some sort of extrapolation is needed to make a probable assessment of the underground conditions. This is explained in the paper 'Geo-registrations, Rockmass conditions and Ground quality', which also introduces a geo-registrations form.  This form can be combined with the Excel spreadsheet geo-calculations  where the rockmass and ground quality are calculated. An example of the use of the Geo-registrations form and the spreadsheet Geo-conditions is shown here.

The ability to observe exposed rocks in the terrain surface varies with the sites, from entire cover by loose materials and/or vegetation or water to 100% exposed rocks.  Different types of investigations can be performed depending on this and whether the rocks are weathered at the terrain surface. Some information on field investigations is given here.

As shown here the RMR, Q and RMi systems use partly the same input parameters.  Common registrations of these parameters can be easily made when the field registration scheme described above is used.

Examples with comments of some rockmass observations can be studied here

As the Q-system is often used for documentation of field observations, there are a few important issues to be aware of:

The Q-value found is site specific, i.e. it specifies the ground conditions at the actual location.   This is important regarding the two input parameters stresses and groundwater.  When mapping in the terrain surface, the stresses are low/zero and there is no groundwater pressure or inflow (the observation area may even be above the groundwater table).  What Q input values should be used for these parameters to characterize the Q-value in the observation point?  The 'geo-observation' paper discusses this problem. See some more comments here.

2. Observations in the tunnel or cavern:

The Q- value indicates the ground quality (i.e. stability) at a specific location.  The area to be supported is often one or two blast rounds long (a blast round varies mostly between 3m and 5m).  Thus the area for assessment of roof stability will be approx. tunnel span × blast round. For a tunnel with 10m span, the area is 30 – 50m2 (or the double if  2 blast rounds are evaluated).  This is important when the number of joint sets is assessed because the joint sets are those found within the 30 – 50m2 only.  This is further discussed in the 'geo-observation' paper.

The RMi value is an approximate measure of the compressive strength of a rockmass. It may be crudely found from input shown in the figure below, which can be downloaded here. Other methods for calculation of the RMi value and the support are given in 'Why RMi?'. 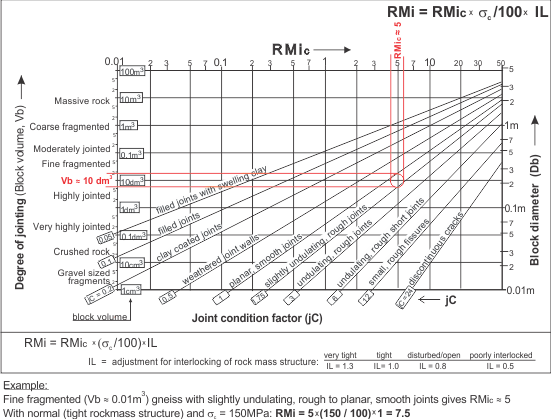 Important quotations are presented below from time to time: